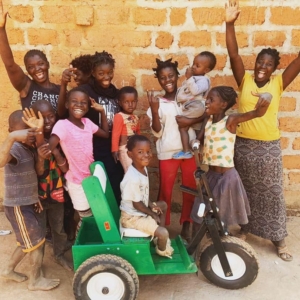 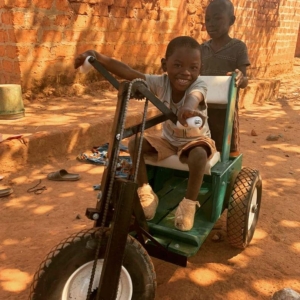 This is Abram. He is 5 years old and lives in Solwezi. Earlier this year he became very ill with malaria and stayed in the hospital for about 2 months. There were complications that led to his feet and his hands being permanently damaged. He has lost all his toes and many of his fingers. His hands have already healed but his feet remain in bandages. His wish was to have a bicycle, so for his 5th birthday he was given a small bike but because his feet are in bandages and still very painful he is unable to ride the bike. He sits each day on a mattress outside his house while his siblings and friends play on the street and learn to ride bikes. Receiving this new PET has given him a new life, one where he can be mobile again and play outside with his brothers and friends. It has given his mother and father hope for his future and much reason for his family and friends to celebrate! Thank you so much for enabling Abram to have one of these PET bicycles.

Want to join the discussion?
Feel free to contribute!

The Growing Church in Zambia!

Continuing the Feeding Program Amidst COVID-19
Scroll to top